Gerald Gustafson’s Underdog Cartridge and the Future of Small Arms

Today we’re continuing our look back through the research that led to the M-16 rifle. If you haven’t read the first few articles in this series, I highly recommend you go back and check them out. This post focuses on the work of Gerald Gustafson, who you might remember from the previous post in the series

If you haven’t been keeping up, let’s do a quick review.

It’s the early 1950s. The burgeoning Cold War between the United States and the Soviet Union is picking up. The Korean War is in full swing, and the venerable M1 Garand isn’t competitive anymore.

The US Army begins funding research into better warfighting methods in the nuclear era. These studies involve everything from individual body armor, more effective infantry weapons, and even fighting under the fallout of a nuclear detonation.

Aberdeen’s Ballistic Research Laboratory (BRL) has taken the lead of small arms research. In 1951, D.L. Hall built upon the research of Kent’s 1930 theory (Part 1 of this article series) concerning small caliber high-velocity projectiles. Hall reports that a small caliber bullet at high velocity might be preferable to traditional full-power cartridges. You can read more about that research in Part 3.

Meanwhile, a competing organization called the Operational Research Office (ORO) is conducting parallel work into conceptual warfighting technology. Project ALCLAD, a study about protecting soldiers, collected large amounts of battlefield casualty data. Norman Hitchman, who was part of the project, continued the work in 1952 with Project BALANCE. He comes to a similar conclusion as Hall a year earlier.

You can read about Hitchman’s findings in Part 2 of this series.

Hitchman’s scientific conclusion was that an ideal infantry rifle would release multiple projectiles with every single squeeze of the trigger. Individual aimed shots were less important than the volume of fire directed towards an exposed target

Don’t confuse this with fully-automatic fire, though. Imagine a rifle with two to four barrels all firing simultaneously in a salvo, or two bullets loaded into a single brass case.

Hitchman and the ORO would lead the charge with this idea. They aptly named it Project SALVO.

However, Aberdeen’s BRL would go a different direction.

As part of D.L. Hall’s work in 1951, William Davis and Gerald Gustafson did much of the ballistic testing on clay forms. The power displayed by the little fast-moving .22 must have left an impression.

In the spring of 1952, Gerald Gustafson gained permission to continue testing small-caliber high-velocity cartridges as a possible replacement for 30 carbine.

Gustafson publishes the results in June of 1953.

Also in the conclusion, Gustafson noted that the modified carbine firing high velocity .22 bullets compared favorably with the famous M1 at ranges inside of 300 yards. The test cartridge used in the study was a 45 grain .22 at 3000 fps, far less capable than what we would see later.

And now, the race is afoot.

At the beginning of Gustafson’s 1953 report, he remarks something interesting.

Colonel R.R. Studler, Office Chief of Ordnance, ORDTS, also gave oral approval to the preliminary investigation with the understanding that a program would be authorized by his office if the cartridge proved promising in early testing.

Col Studler appeared in this series before. He was the one who directed D.L. Hall to perform the 1951 study. He also held an unfavorable view of the ORO, who he perceived as encroaching on his territory.

What wasn’t written is that Studler had been championing another weapon system since 1945, the T25. The experimental rifle fired an experimental “lightweight30 caliber cartridge. That particular cartridge would later become 7.62 NATO.

Forgotten Weapons did a great write-up on the project.

Studler viewed this side research into .22 as an annoyance and made no qualms to tell Gustafson that his pet project was on a “spare time” basis only. Col Studler kept the .22 research quiet, as he didn’t want it interfering with the development of the 30 Cal rifle.

Since the late 1940s, the goal was a single universal rifle and cartridge system. The idea was that the same rifle could be used for a variety of roles including front-life rifles, automatic carbines, and heavy support machine guns.

The most direct route appeared to be lightening the 30-06 cartridge, the rifle, and feeding from a box magazine.

The other two competing rifles were the T-44 and T-48.

The T-44 was essentially a product improved M1 Garand, and would eventually win the competition to be designated the M14. The T-48 was the FN FAL.

But those are besides the point.

The trouble that everyone kept running into was that a lightweight rifle firing a full power rifle cartridge was uncontrollable under fully automatic fire.

All of this to say that the Army was convinced that a full power rifle cartridge was the way to go. It’s what they all “grew up” with, and it’s what many of them competed with at Camp Perry. It is what they knew they needed, no matter what the engineers told them.

By 1954, the reports of Hall, Hitchman, and Gustafson, the and capabilities of small-caliber high-velocity (SCHV) cartridges were gaining attention.

Gustafson and Davis got permission to continue SCHV research and planned to develop a “.22 NATO” cartridge. They built the concept around a 68-grain projectile fired at 3400 FPS.

Davis begins official testing in November that year and published the confidential report, “An Investigation of an Experimental Caliber .22 High-Velocity Bullet for Rifles,” in December of 1955.

He made the following key findings about the .22 test cartridge compared to the .30 Cal M2 ball:

Davis also wrote about the dimensions and gyroscopic stability of the experimental .22 cartridge.

If you aren’t familiar with gyroscopic stability factors, it is basically a measure of how stable a bullet is in flight. It relates to the twist rate of the barrel, projectile weight & shape, and projectile velocity. You can read more about it in my article on twist rates. The short version here is that the 9 and 10 twist barrels were what we consider marginally stable. The 8 twist barrel was ok.

Shortly after releasing this report, Gustafson and Davis again request funding to continue testing on another iteration of their fast-moving .22 cartridge. Thus far in their research, they’d been testing bullets that copied the flat-based shape of the 30-06 M2 ball bullet. This time around, they want to test a 55-grain boat tail bullet at 3300 feet per second.

Their funding was denied.

Gustafson and Davis had ruffled enough feathers at Aberdeen. The Ordnance Department was going all in with the T-44 rifle and was done playing with the SCHV concept that the ORO was seemingly obsessed with.

But the story doesn’t end there. Another agency, the Army Infantry Board, was watching from the sidelines, had seen some of the tests first hand, and had some questions of their own.

Stay tuned until next time. 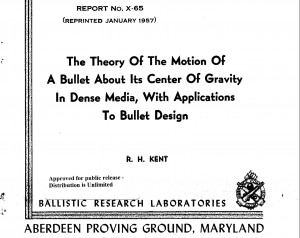 The 1930 Report that Changed the World- Sort of

I love this series. It needs to be in it’s own ‘playlist’ so that I can refer others to it in the future.

Thanks! I definitely plan for it to be a playlist under the SCHV tag. When it’s all done, I’ll link it under the “Popular” menu. 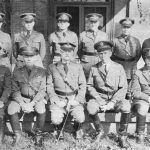 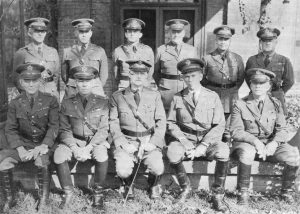